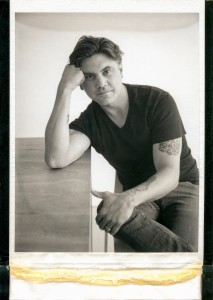 HI.
MY NAME IS JEREMY CHARLES.
I AM AN IMAGE MAKER.

A photographer specializing in Advertising, Editorial assignments, Music and Architecture. Best known for creative portraits of musicians, public figures and athletes. We have a house in Tulsa, OK. But my work often leads to adventures in far away lands.

My background as an art director (10 years) greatly informs my approach as a photographer. I speak the language of design and understand what makes a photograph both beautiful and useful. From directing large scale productions to a solo journalistic approach , I strive to make great work every day, and to have fun doing it.

Born and raised in the ranch lands of Northeast Oklahoma in a town called Oologah (a Cherokee word meaning ‘Dark Cloud’), I now live in Tulsa, OK with wife Jenny and daughters Lillian and Wren.

From the Urban Tulsa Weekly -”This one makes us proud. You see, we knew Jeremy Charles long before you guys decided to vote him your favorite photographer in Tulsa. He began shooting for UTW six years ago, and we’ve enjoyed watching him grow and develop as an artist.

Now, with his own business and more gigs than he can count, Charles is proving you right — he really is one of Tulsa’s best photographers.”

Number 19. “Jeremy Charles, photographer. Giving Tulsa a view of music and life that is unique and artistic a whole new way. His latest exhibit “Wall of Sound” perfectly captured some of the city’s best musicians.”